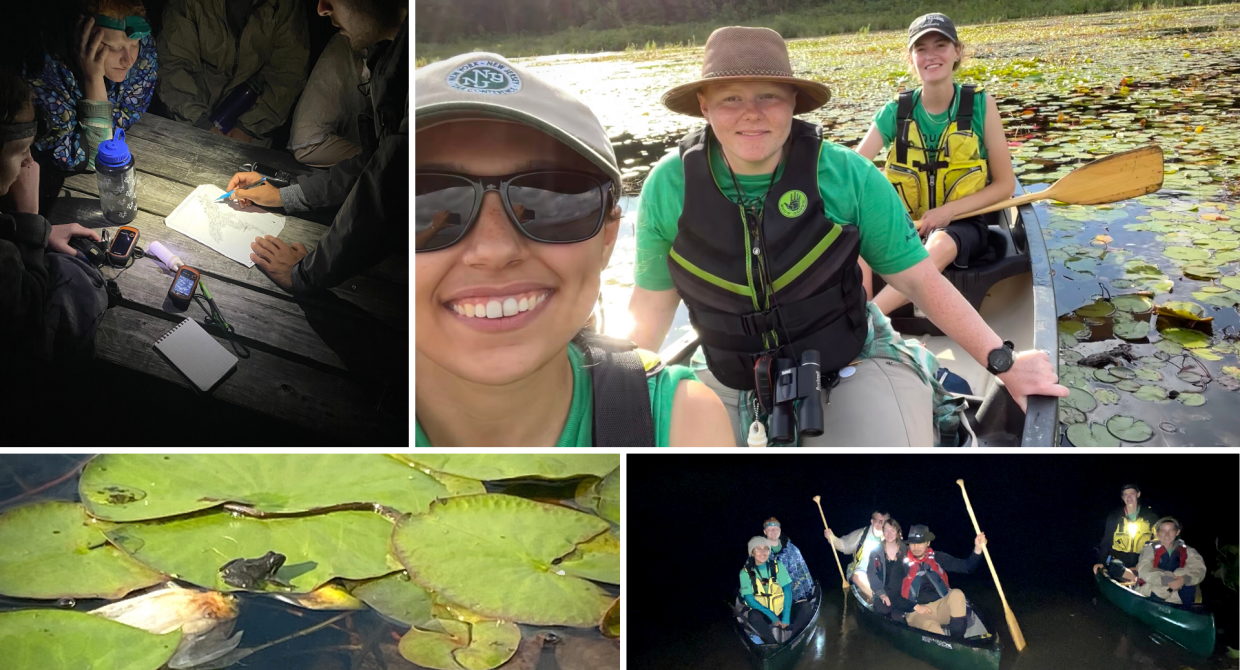 Recently, endangered species conservation and invasive species management converged for our Aquatics Invasives Strike Force (AISF) crew. In 2019, the AISF crew managed an infestation of invasive water chestnut at a lake in Orange County. This year, the crew planned to return to complete surveys via rake toss as well as pull out any remaining water chestnut. However, after conducting a bit of research, Aquatic Invasive Species Program Coordinator, Devin DiGiacopo, Ph.D., discovered that this lake was, in fact, home to the endangered northern cricket frog!

The northern cricket frog is one of New York’s smallest vertebrates at only 1 inch in length. Listed as an endangered species in the state, this particular frog predominantly utilizes aquatic vegetation as both its habitat and breeding ground.

After reviewing the species recovery plan which explicitly stated that pulling floating plants could be detrimental to these frogs, Devin reached out to the NYS DEC for guidance.

With assistance from DEC Wildlife Technician, Callie Barth-Dwyer, the AISF crew ventured to the lake for visual and auditory surveys. These surveys would help determine whether there was an overlap between the invasive water chestnut infestation and northern cricket frog territory - and whether the frogs’ population had been affected by the 2019 water chestnut removal.

After completing a visual survey of the lake, determining the densely (and natively!) vegetated south end was premier cricket frog habitat, the crew waited until after sunset to conduct a frog call survey.

When they ventured to the same south end of the lake, the crew heard a cacophony of sounds including green frogs, gray tree frogs, bullfrogs, and, of course, northern cricket frogs! The breeding call of these cricket frogs, which sounds like two marbles clicking together, was at the highest rating of intensity for the survey out of all species present. The high presence of cricket frogs in this native plant-populated area of the lake was encouraging. This observation signified a lack of overlap between cricket frogs and water chestnut, hopefully indicating that previous and future water chestnut removal efforts by the AISF crew are not detrimental to this species. With this data set, the AISF crew can now work on a management plan that ensures this tiny amphibian has continued success at this site.